I finally got back to one of my favorite Washington, DC liquor stores, Pearson’s, which is off Wisconsin Avenue. The choices are always fun because they do not stock typical offerings that most stores do, especially the Virginia ABC stores… (where selection sucks)

So I was happy to see among several offerings this Gordon and Macphail’s 10 year single malt. I have enjoyed several of their offerings but never a “standard” like this one. I actually enjoy not knowing which distiller they purchased their product from. This mystery malt sat either in a Speyside warehouse or in Elgin at G&M’s warehouse. Regardless, someone distilled it and G&M claimed it. It’s that simple.

What isn’t simple is the complexity of this dram. It is very nice, balanced, and has great mouth-feel. The fruit that comes off the nose is nice and I rather enjoyed it without water. After adding water a few more notes open up in the nose and as for taste, it smoothed out like a lake in the morning.

The cost of this was exactly 42.99 USD. I believe it to be priced about right (nothing you can do about taxes) and I believe it is distinct enough from the likes of Balvenie and Macallan to set in among your scotch offerings. I would call this a daily drinker but I rather think it special. And so, only a twice or so a week dram. I can always rely on Grant’s as my anytime dram.

You could enjoy a cigar with this, but, I’d reserve this as an aperitif or a dinner dram. I’m not an advocate of drinking great scotch with cigars because inevitably, one will win out and the other will be non-present.

So if you are lucky enough to pick up one of these, I would encourage you, I think it’s worth a try! 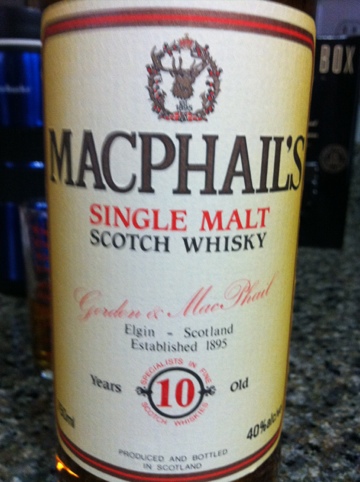