This whisky has been written about so many times I feel like I’m saying,me too, but I think it only proper to review it. I have had TEN out many times but have never really purchased a bottle many times. Typically I shoot for the special releases of Ardbeg which I invariably end up paying way too much for due to their availability.

But today they had a sale on the TEN and my inner Islay was saying do it. So I did. I had the Ardbog (not a misspelling) special release yesterday and it was simply marvelous. I really expected a bit more peat in it though, but it’s really polished. The TEN is a lighter side of Ardbeg. Still delivers lots of peat and pepper on your palate but really is a good daily drinker for those of us who prefer some peat in our whisky.

So when I decided to take a photo of this precious one, I thought I’d find a nice patch of green grass to complement the green bottle.I happened to walk by my fire pit, or Chimnea. I had placed some small wood in it already and thought, yes, it is only fitting for a peaty “fired” malted barley whisky to be placed in there. So there you go.

So tasting this expression is unmistakable Islay peat. It is really a level tasting experience. The spirit is consistent from taste to swallow and your first couple of sips will be formative. After a few your buds become numb and you notice more of the flavors. Overall a fine whisky…. just don’t make it your first Scotch whisky. At 46% ABV you may want to add water, I find it pleasing neat however.

If it makes you want to eat bacon, you are normal.

Their web-site is quite nice! 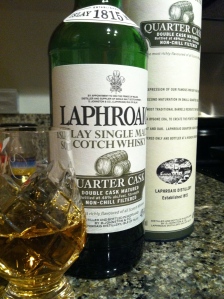 Peat. Its a wonderful natural substance that grows in the soils of Scotland as well as many places around the world. When it isn’t enriching soil, it is making a serious influence on the Isle of Islay in Scotland by heaping itself onto the fires drying out the malted barley. If you are new to scotch, this is not my recommended “first drink.” Or third, fith, etc….

You see, Laphroaig is a special whisky. It has special properties, kind of like hell has a special temperature. Peat reins supreme in this Quarter Cask offering and at 48% ABV it has a delivery mechanism courtesy of alcohol that is akin to driving a Ferrari through a small parking lot with the throttle stuck.

Although when you first pour a dram of it, it looks quite tame and ordinary as colours often do in scotch. Yet you dont’ have to get your nose all the way into the glass to know that you have something quite special, and if of the faint of heart, risky in your hands.

The extreme kick of phenols of some Islay scotch’s like this one have caused some people to refer to the nosing of such a glass as being akin to iodine or some other medicinal substance. It does have medicinal properties! More on that later.

When you nose this glass the ethanol kicks you right in the nose and says get ready, here I come. The tasting is no different. There is no all promise and no delivery in this product. Now, I know what you’re thinking. Who would drink such a thing. Well, other than native Scots, I’d say there are many around the World who really enjoy this type of whisky. My first love of Scotch was a Bowmore product, also in the Islay family yet much more of a gentleman. This Quarter Cask is a great representation of what can be done with whisky and the elements that surround Scotland.

I would try to translate the taste to you but it would fall short. This is something you have to experience and then you will see there is nothing quite like it. I drank this neat, but since it is quite complex I would recommend some water. It is not chill-filtered so is not geared toward adding ice as it will cloud up.

As for the medicinal value, tonight I had quite a sour stomach due to the excellent pot roast I  made. My stomach didn’t quite agree with me though. I had a about an ounce or so of some of this whisky and within minutes, the sourness was gone.