Recently I met up with a couple of Whiskey enthusiasts at Jack Rose Dining Saloon in Washington D.C. and as usual, tried a few single malt scotch whisky’s that I haven’t had before. Before I forget, the food, as usual was awesome! I had the Duck Breast, awesome, and a delicious appetizer the Chef whipped up for me special, many thanks!!

So, the first dram was a Glen Garioch 21 year that was very reminiscent of the 12 year I have in my cabinet yet smoother and more refined. I thought the Garioch would go great with Duck and I proved this out to my liking. The most surprising aspect of this dram was that at 43% ABV it still had a nice little initial alcohol burn on the nosing. It of course went away as I kept my nose firmly implanted in it. A very nice fruity dram. 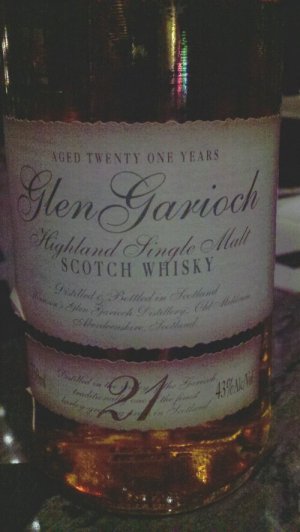 Second up was the Prime Malt bottling I spied that turned out to be an aged Macallan which always interests me. As a rule, scotch that I can find almost anywhere on God’s green earth tends to not please me but The Macallan has yet to disappoint. This dram was no exception and the 30 years of aging proved in-line with other aged Macallan’s I have had. It’s just a hard offering  to beat, regardless of the bottler! 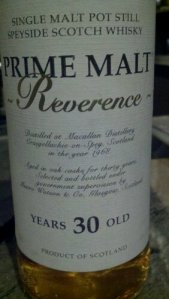 At the urging of the bartender I tried his favorite single malt, which is saying A LOT, when you are at Jack Rose! So the Rosebank is famous and unfortunately rare since the distillery was closed in 1993. Chieftain’s offering from them was a 20-year-old (aged) and I can’t say it is my favorite dram at JR’s but it offers a very interesting experience. The flavors impact you first at the tip of the tongue and on the finish the flavors rush to the rear of your palate. Quite different, and I have experienced this before but it is not typical in my experience. I quite enjoyed it and it was probably the best dram of the three that night.

So if you are reading this and find yourself in the Washington D.C. area, you also can find these fine drams (though drams like this are limited!) so get down there and imbibe! 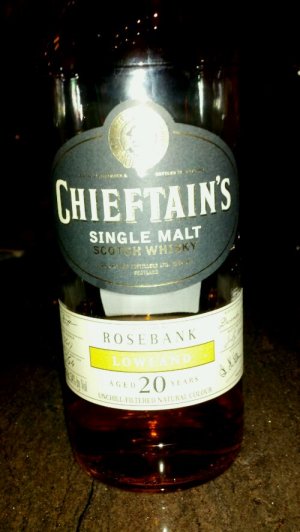 P.S.! If you were not aware, Jack Rose has a VERY nice humidor from Draper’s cigars and it is filled with Premium Cigars! All for $10! And between you and me, some are worth a LOT more than that! Smoking is allowed upstairs.

On Columbus day while the masses of people lucky enough to “celebrate” a holiday that marketing has yet to figure out how to make money on, I made my way to a cigar event that was a blast. The Cigar Town shop in Reston’s Town Center was the event site and what a great store and evening it was. I was a bit early I guess so I purchased a Don Pepin “blue label” and settled into the private smoking lounge and watched ESPN. Soon the event kicked off and people flooded in! There was deals to be had with box discounts and free shirts, plus a freshly rolled cigar by Rene, Pepin’s personal master roller who is a treat to watch work. 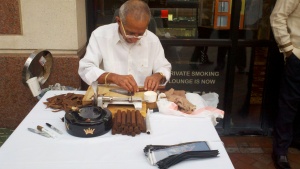 The crowd was quite lively and you could tell there were Pepin enthusiasts amongst the crowd. The boxes of Pepin cigars were quickly disappearing to men with big grins on their faces who hadn’t yet realized they’d dropped a few hundred dollars. But when you like Premium Cigars, that is just the cost! Pepin graciously signed each person’s box purchase, posed for pictures and shared some knowledge with those who were interested in the whole cigar industry and more specifically what it takes to make a premium cigar. Although my spanish is poor at best, he is just a very genuine gentleman and does not have any hint of celebrity or arrogance to him. This is a guy you would want to hang out with! 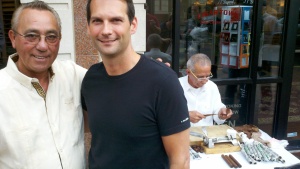 So I too couldn’t resist the discount, free Pepin shirt and freshly rolled cigar by Rene and walked out with a box of my Pepin favorites  that I refer to as “Blue Label” because that is the color of the band. I’m sophisticated like that. I met some really interesting people there, compared cigar likes with a few and genuinely enjoyed myself. Of course, no great event is complete without a beautiful young lady, so this event was no exception! I joked with her that only a place like this would an old man distract a crowd of men away from her! So if you haven’t tried Don Pepin Garcia cigars you are missing out. The My Father line is highly revered and the man simply knows how to blend tobacco leafs! He has only been out of Cuba’s factories for about eleven years and is making waves all over the industry. Do yourself a favor and pick one up today.

I have added a new section or page to theScotchlife blog. Notice the tab up top labeled Cigar and Whisky events. I will be adding the events that I intend on going to as well as ones I learn about that I think you would enjoy. The events will be primarily events held in the USA for now. Also, most of the local events will be located in Washington DC/Virginia area as that is where I live.

If you have any events please let me know. There is such a large community of Cigar and Whisky lovers and it would be a shame to not know of great events happening in your own backyard!

Please notice the 2012 Nth event. This is upcoming in March in Las Vegas, NV and is the single greatest scotch tasting event in the States available, not to mention it’s in our favorite city! The same organizers of this are having several city events and you will be able to taste scotch that is ONLY available through these events!

Also, make sure you are subscribed to my twitter feed which will also alert you to things going on. @theScotchlife 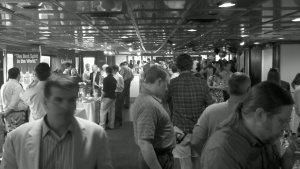 The Balvenie Roadshow tasting in DC at Poste 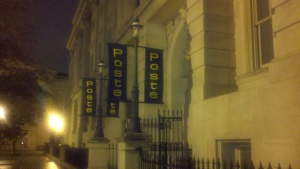 As October ushered itself into Washington D.C. so did the fall-esque weather complete with 50f temperatures and cool rain. It was only fitting to have a Scotch tasting that was originally planned for outdoors at the Poste restaurant in the heart of the city. After arriving soon enough to see the Morgan off-loaded from the truck and driven through the portal which takes you to Poste, I was in no way deterred by the mist and was genuinely happy to see this fine hand-made car take its place in the outdoor dining area that it would have to ultimately spend alone. 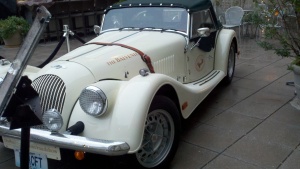 Though the weather was gloomy the crowd and especially the host of the evening Andrew Weir was not. Andrew has one of the best jobs in the world (excluding constant travel) and that is to be the Balvenie Ambassador for the Eastern Coast of the U.S. Unlike some reps that I have met in the whisky or cigar industry Andrew is genuinely welcoming and eager to share his knowledge of his product. I also appreciate Andrews’ unwillingness to talk bad about any competing product (which I’ve heard numerous times) and his attitude towards “you enjoy scotch how you like it, because you paid for it!”

Due to the rain the tasting was moved inside to what equates to a bar/entry to the restaurant. The noise from the main dining area was an incredibly unwelcome obstacle for any speaker but everyone there tolerated it and though Andrew merely fakes a Scottish accent we could at least understand some of what he said. Just kidding Andrew. The drams that were to be had were Balvenie’s current offerings of Doublewood 12 year, Single Barrel 15 year, and Portwood 21 year. They are three very different offerings but all very Balvenie. The Doublewood is the perfect scotch to start drinking when you are just starting your journey into scotch. I believe Andrew called it the “gateway” scotch into Balvenie. I would call it the gateway into seriously good scotch! Reportedly this is one of David Stewart’s favorite products which says a lot for a Master of 50 years. The Doublewood has spent most of its life in an American Bourbon barrel and finished up in an European Sherry cask. It is a delightful dram and one I would consider a “go-to” scotch.

The Single Cask 15 is a very different taste because it does carry the kick of a single cask. The ethanol alcohol level is a bit higher and if you like that you will like this offering. I really prefer this to the Doublewood because I do enjoy the kick. It is also different from Doublewood because it only matures in American Oak. No Sherry. So you are going to get more vanilla upfront whereas it is a bit hidden by the Sherry Oak in the Doublewood.

The Portwood 21 is good. Period. It has won several awards and in my mind is a first-rate contender with anything on the market in the premium category. It has spent time in rare Port casks that impart a deliciousness that comes across as honeyed raisins. This is the scotch you have with the Duck and Creme Brûlée. It is a bit pricey but you should experience this scotch, it can be found by the dram in your better bars.

The evening went well despite the din of the restaurant and aside from the whisky nerds (myself and one other gentleman) I believe some whisky novices were very pleased to have discovered this tasting.

As an aside, the appetizers from Poste were extremely well prepared and after the tasting I did enjoy a grass-fed cheeseburger that was actually cooked the way I ordered it, medium. It was delightful! I have found that if a nice restaurant can produce a great burger then you can be assured their other offerings are great as well. If you were wondering if you should try this restaurant out I would encourage you to do so. They also have a great selection and variety in scotch.

The evening was great and as Andrew was leaving he slipped me a gift. It really took me by surprise and was totally unexpected. Let’s just say it has something to do with a future offering and I will be tasting it this week. I have also embedded the video from Balvenie about the roadshow, it’s a great video and I hope you enjoy it, preferably with a Balvenie!