There is a certain pain being a scotch enthusiast in America. That being that there is a massive body of water in between the distilleries in Scotland and our taste buds being parked in North America. Yet a few retailers have seen fit to ship products over to us and for this, I am thankful!

So my most recent order from Master of Malt held a few goodies that I wanted to try and one bottle of Edradour that a retailer in California had but by law could not ship to the Commonwealth of Virginia. WTF! So I’m not going to get into a rant about the idiotic laws between the States in America and their agreements to sale or not to each other, but in times when we need all of the money to change hands in this country to support jobs, I’m just at a loss. And so is a shop in California.

So two of the small 3cl bottles I ordered contained something very unusual. An actual Dalmore single cask tasting. If you enjoy the Dalmore, as I do, you are used to the usual complex offering that Richard Paterson assembles with single malts in various casks to achieve a unique offering. These offerings are very nice and win awards, but they do not market a single cask to my knowledge. So seeing this 14 year aged product distilled in 1996 was a must try, and it has left me begging for, a full bottle!

I drank the first one about a week ago and was so impressed with its freshness and difference compared to other Dalmore offerings. You immediately notice that this does not have a sherry nose or color. The nose was light and if I was unaware of what I was about to drink I would guess a Speyside offering. The ABV is 55.5% which is quite a bit higher alcohol content than what Dalmore’s typical offerings are at. This was not lost on me when I took the first sip! It’s like a rose garden exploding in your mouth! But like Dalmore offerings quietly leaves a great mouthfeel and actually left me begging for more.

I do taste a lot more than I write about, pesky day job and all keeps me down, but I had to make note of this one! I would encourage you to try out the Master of Malt offerings, it’s the only way to get unique offerings on this side of the Pond (known officially as the Atlantic Ocean) and I loved tasting this “naked” Dalmore offering.

The other night I grabbed a healthy dram of Dalmore 12yr as opposed to the Gran Reserva (Cigar Malt) that I usually drink and headed downstairs with a Cohiba Puro Dominicana to spend some time talking to a neighbor. I have spent so much of my Dalmore focus on the Gran Reserva that I have not thought about the 12 year as much. While having a great conversation I started to realize how very polished and good the 12 year is and how well it was pairing with this Cohiba.

Tonight I poured another dram or two of the 12yr and headed downstairs with an Alec Bradley Harvest Habano to enjoy. The Dalmore 12 yr offering is so refined and a bit more elegant than the Gran Reserva in color and palate. The jammy fruit of the Gran Reserva is a bit more reserved in the 12 year and doesn’t linger or demand as much of your attention. The 12yr is a really good sipping whisky and I truly do consider it on equal footing as the Gran Reserva and probably a bit more crowd pleasing. Again, I do drink whisky neat unless it is overly high in ABV and then cut it with pure water.

The cigar, AB’s Harvest Habano really scored with me tonight. This cigar impressed me unlike others have in awhile. Its like a fine peace of leather that you want more of. It has a balanced and pleasant smell and the smoke is not offensive. The flavors are subtle but pleasing and it is definitely a cigar that I smoked down to the nub. This is a cigar I will smoke again, because I do have another one, and would jump at a box if given a good deal. You won’t be disappointed.

I’m almost at a loss here because I could talk in wild rambling circles about my experience of meeting Richard Paterson in Las Vegas at the Nth event recently and sharing a cigar with him and the new upcoming re-release of The Cigar Malt by Dalmore. There are some things that defy words, or maybe the right vocabulary just escapes me, whichever, this is simply a whisky you must own if you smoke cigars and consider yourself a scotch drinker.

So there was once, The Cigar Malt, then, because of a mis-perception of what the scotch was all about (people actually believed they put tobacco in the scotch) they renamed it, The Gran Reserva. Well, then cigar smokers who enjoyed it said, WHAT they HEY! Where did it go, well, nowhere actually. So, I do not have the final marketing notes yet but rest assured that The Cigar Malt will find its way back onto this wonderful whisky. In the meantime, The Gran Reserva isThe Cigar Malt. Make sense? Well just go buy it. Damn.

In Michael Jackson’s Complete Guide to Single Malt Scotch it is described as a “complement rather than a contrast” to a cigar. If you are not sure what that means, fire up a cigar and pull out an Ardbeg Corryveckran and you may get it. Please, only choose this combination if you know what you are doing. You might want to have a side of bacon ready. If you are an Ardbeg fan, you know what I mean!

The Gran Reserva whisky is comprised of a blend of single malt highland whisky’s between 10 and 20 years old. It, to me, is as balanced as a complex whisky can get. And surprisingly this is not an $80 USD whisky but drinks much better to me than some that command that price. I tend to favor a medium to full cigar that delivers good flavor. I tend to always like a puro Nicaraguan cigar but am surprised by some blends with the Nicaraguans also. This whisky may drown out a light cigar like a Montecristo #2 or Macanudo but certainly would be a better experience than a Glenlevit or Johnny Walker (pick a color).

Here are some of the notes from Michael Jackson’s Guide on the whisky:

I put that in there for those who actually like tasting notes, I’d describe it as frickin perfect!

As Richard would say, Slainte Mhath! 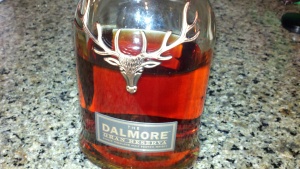 So the bad thing about drinking various whisky’s and smoking various cigars is trying to record and then write intelligibly about them in a timely manner.

I decided tonight I need to “catch up” with notes, somewhat, and multi-task. So I grabbed a stick out of the humidor and proceeded to the garage to write, smoke, and drink. Sounds good in theory but takes some work.

I pulled out the Art Deco Gran Toro cigar I procured from Leesburg Cigar and Pipe and headed out to sit by my lovely Triumph Rocket III and type.

I also brought with me a generous dram of The Dalmore 12 year. I’m determined to find the perfect smoke with The Dalmore and thought this might work.

To the regular smoker as myself this appears as a large ring cigar that is slightly oily and dark.Since it has a large amount of Nicaraguan leaf in it I thought it would be nice. It appears to be loosely wrapped and has a very nice smell to it.

CAUTION: This cigar, when lit, really announces itself. The firing up of it is like firing up an old V8 from the 60’s (no smog control) and any non cigar enthusiast nearby might just make note of it in a less than approving manner. Once the cigar is a full burn it leans out though, like a good V8 should, and delivers a less than offensive burn. The taste is a bit woody, old wood, but very nice, pure tobacco, no sugary sweetness or hint of spice in this one. It’s all about business.

The ash really opened up and I thought I would ash early but it hung on to my surprise and I actually dumped the ash due to it hanging over my laptop.

As far as the Dalmore. I found that the dram and the cigar were like two heavy-weight boxers who were hanging out enjoying each other, but in the ring would be all business. But for now, the cigar and the dram complemented each other but each showed their own strengths.
This combo is not for the casual smoker or imbibers for that much. I believe you need to be serious about The Dalmore and the Art Deco cigar. I’d recommend this combination after a nice prime rib or a porterhouse dinner. This also makes an excellent “chewing” cigar for those who like to chew on cigars for a while before lighting or not.

Some marketing notes and a good place to buy this cigar from can be found at cigars international.

I picked up this smoke at a local shop only because I’d heard people refer to it while sampling some Dalmore Cigar Malt in Vegas. I was curious to the flavor of it, I’m not a Montecristo regular, and how it would pair with a Dalmore whisky. Now I picked the #2 white label on the advise of the well-educated gentleman at the tobacco shop. He explained that the Ecuadorian Connecticut shade wrapper would give me a little bit more flavor, which I insist upon.

I did not have dram in hand, that I remember, when smoking this cigar. What I do remember was that this was not a very powerful cigar. As I referred to an earlier article, this cigar is taken largely from the lower leafs on a plant, they are shielded from the sun and do not produce as much flavors as the leaves further up the plant. The cigar is marketed as a rich, creamy and flavorful, well-rounded smoke. I’ll go with creamy, flavorful, to an extent, but rich, not so much. I have a hard palate, I drink black coffee and I drink whisky neat. To me this cigar is a great golf cigar or a pre-dinner cigar. It doesn’t challenge my palate much and if I’m around friends just enjoying the conversation this cigar would be just fine. But as someone who is trying to awaken and challenge my palate, not so much.

As far as pairing it with whisky, I would not choose a Dalmore. To me a Dalmore has way too much flavor to it, due to the excellent work of “The Nose” Richard Paterson, and I would think a Dalmore would overpower the Montecristo #2. I recently imbibed on some 12yr Dalmore and thought a medium to full cigar would be a better match. If you want guidance on a Dalmore, I recently smoked a Gurkha Regent Torpedo and I think it would be up to the task.

To me, the #2 would be best suited with a great Speyside, non-peated, whisky. I’d like to try it with a Balvenie expression.

One impression I do remember at full smoke was that a great, out of the oven yeast roll would be at home along side this cigar. It was the most exact pairing I could think of since that taste was coming through.