The Macallan tasting event at Ibiza

On a blistery cool evening in DC The Macallan put on a tasting at Ibiza which is best described as a night club that is in a more distant area than most events around the nations capital. It was too my surprise that these tastings had multiple times on the evening but that went into disbelief when I saw how large this event was. The setting itself screamed “nightlife” and you were just wondering when a DJ was going to pop out, Macallan poured and a mob dance break out.

Instead of the DJ there were multiple servers swimming around with trays of tasting glasses and a stage set up with a large LED screen and Iconic looking bottles of Macallan lined up. Then out popped the DJ, er, well Martin Daraz actually. Now having seen Martin before at work, I knew that the right guy was sent to a large crowd that was probably hoping the DJ would show up. Martin is highly entertaining and extremely well informed. I actually wish more large brand distillers could follow Macallan’s lead. This was a very well done event and I think everyone went away knowing, as many do, how well Macallan products taste and are presented.

There wasn’t anything presented at this event that I wasn’t familiar with but because of the well execution and sheer entertainment value of Martin I left with a smile on my face. If you have not had The Macallan products, which I don’t know how you could avoid such a task, you owe it to yourself to try out their 12 year offering which is quite ubiquitous. The Macallan is one of those rare products that although found almost anywhere you go, is always worth the pour. 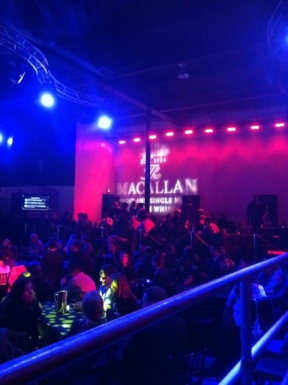